The Cave of Dragonflies Zodiac

What it is is basically a Pokémon-themed calendar. In previous generations, the Zodiac has one way or another assigned a Pokémon to every day of the year; the new Alolan Zodiac, however, puts a twist on things as is the Alola region's specialty and focuses instead on the many trainers of the Alola region!

The Zodiac is not just a calendar, however; it also has its own backstory.

Once upon a time, the greatest trainers of Alola - or those of them with the right kind of versus sprite, at any rate - came together for a council on the governance of the region. Alola had become lawless and dangerous, and they felt they had to step in to bring peace and order to the islands.

Despite public protests against this 'hostile regional takeover', they decided that they would split the year into four seasons, one for each of the four islands of Alola; that they would each rule over one month of the year, known as their 'reign'; and that within each reign, one day would be dedicated to each of the many classes of trainers populating Alola. The first day of each reign would be the Day of the Youngster; the next would be the Day of the Lass; and so on. On the day of each trainer class, the trainers of that class would be honoured and given free vitamins for their Pokémon. This quickly soothed the angry voices, and the new system was soon implemented.

As is humans' custom, traditions quickly sprung up around some of the days of the reigns:

However, one day Lusamine of the Aether Foundation approached the greatest trainers to demand a place in the Zodiac for Aether Paradise - it was a fifth island, she argued, so it deserved a season devoted to itself. After a long and contentious meeting, they approached Solgaleo and convinced it use its cosmic powers to alter the orbit of the Earth so as to add one day to the year, to be devoted to the employees of the Aether Foundation. (A bribe may have been involved.)

Also, Kahili went golfing on Poni Island, and that's why she's in the Season of Poni Island. I don't know why, she just did. Hapu does not have the right kind of versus sprite, okay.

So What's My Zodiac Trainer?

If you want to look up a particular date (such as your birthday) in the Alolan Zodiac, you can do so using the form below. This will show both a text string with the trainer class, reign and season of the day, similar to that displayed on the pages of this site, and an image representing that date that you can use however you like. If you have Javascript enabled, click on an image to have the HTML and BBCode for displaying that image shown below the image.

Oct 22: The Day of the Office Worker in the Reign of Guzma, Season of Ula'ula Island 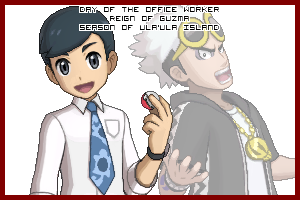