One of the first things Pokémon players will notice when they start breeding Pokémon is that Pokémon reproduction works nothing like ours. In particular, Pokémon inheritance is very unusual: whereas the inheritance of IVs portrayed in the games passes as a simplification of inheritance in Earth animals, the species of a Pokémon is always identical to that of the mother. This would be plainly impossible in Earth animals, where a child inherits a random half of each parent's genome. Moreover, while the general recipe for the body is inherited from the mother, Pokémon can inherit the ability to use particular moves from the father.

In addition to the inheritance oddities, Pokémon also have varying sex ratios. While animal gender ratios can vary, the way that Pokémon gender ratios come consistently in negative powers of two - when one gender is more common than the other, the less common is always either one quarter or one eighth of the population - is curious and must be considered before being dismissed as a coincidence.

So how does this all work? What system of inheritance can get this all to make sense? 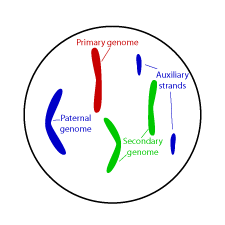 The Structure of the Genome

A Pokémon's genome is split into several different components:

A more detailed explanation of the gametes produced by each sex and how the recombination occurs is illustrated below.

So how does this system of genetics explain the breeding mechanics we observe in Pokémon?

The primary genome, containing all the coding for the basic body structure of the Pokémon, is passed through the female line and only mixes with homologous paternal genomes, keeping the genetic code for the species completely apart from the genes of any different-species fathers that may enter the picture.

Note that Pokémon such as Nidoran male/female and Volbeat/Illumise are often counted as different species, but are in fact the same species, in that they have the same primary gene pool. The merely have more significant differences between the sexes than most other Pokémon, with more different genes activating in only one sex but not the other. More on sex determination below.

When Pokémon learn and use moves, certain normally-dormant genes in the primary genome are 'activated', promoting the skills required. Forgetting moves deactivates these genes again. This feature evolved to let the Pokémon optimize its body to perform the moves that it commonly uses in its daily life, while conserving any extra energy that would have to go into being primed to use other moves that it doesn't need. When a sperm cell is formed and the paternal imprint is established, these activated move genes are the only ones that are not suppressed.

After fertilization, the primary genome's activated move genes are normally all reset to be dormant, giving the baby a fresh start move-wise. However, if the paternal genome contains similar genes that are activated, they will interfere with this process, keeping the counterpart genes in the primary genome active. This feature evolved because in nature, both parents using the same move on a regular basis tends to mean that this is an especially useful move in the Pokémon's current environment. For certain move genes, especially ones that are sensitive to outside activation, a counterpart gene being active in the paternal genome can even activate previously inactive genes in the primary genome.

The Marill family is somewhat unusual in this regard; it is female-dominant and two of its auxiliary strands, referred to as the alpha and beta strand, are required to turn an Azurill into a male; however, a Marill or Azumarill only needs the alpha strand to become male. Because Pokémon's bodies are wholly reconstructed during evolution, this means one third of female Azurill (those that have an alpha strand but not a beta strand, as opposed to those that have only the beta strand and those that have neither) will turn male when they become Marill.

Pokémon species that have two abilities have their ability determined by the presence or nonpresence of yet another auxiliary strand. Again, one ability is the default, whereas an auxiliary strand will modify the developmental process resulting in the Pokémon getting the other ability.

The alternate abilities most species of Pokémon can have (often known as "Dream World abilities") develop from a type of symbiotic virus that imitates an auxiliary strand; it is not broken down on egg creation but instead is passed on to one of the daughter cells.

The formation of Pokémon gametes happens in several phases, much like meiosis as we know it in animals. Leaving out the parts that are irrelevant to our discussion, the processes happening during each phase are the following: 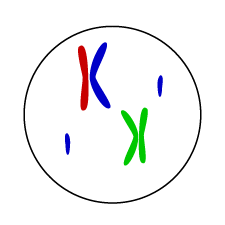 The maternal and paternal chromatids of the secondary genome pair up. If the primary and paternal genome are homologous (i.e. the Pokémon's father and mother were both of the same species), they also pair up. Random homologous recombination occurs between the paired chromatids. 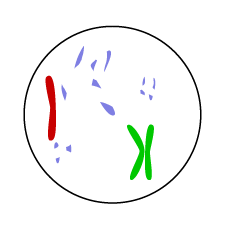 The tertiary genome of the cell is destroyed in its entirety; its building blocks will be used for replication of the rest of the genome in later phases. 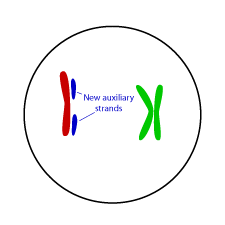 During the formation of eggs, all the auxiliary strands appropriate to the species are created at this stage by duplicating all the designated regions of the primary genome once. 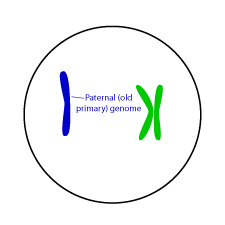 When sperm are formed, no auxiliary strands are created, but the primary genome is instead converted to be mostly-inactive in order to suppress its ability to shape the offspring once it joins with an egg. This is basically imprinting as we know it in real-world genetics on more drastic scale. 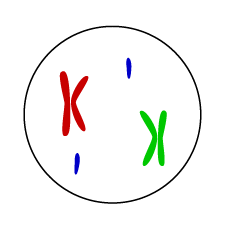 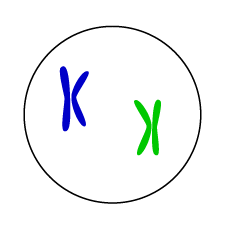 The primary genome is duplicated. 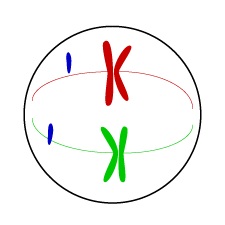 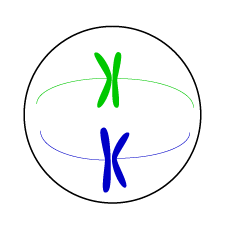 The paired chromatids of the secondary genome and the two copies of the primary genome line up near the middle of the cell. 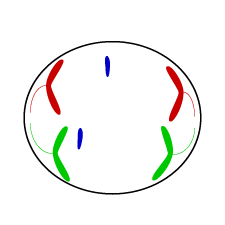 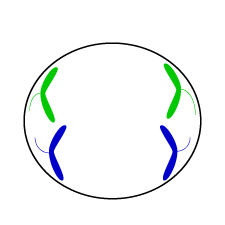 The secondary chromatids and the primary genome copies are pulled apart to opposite ends of the cell as it prepares to divide. 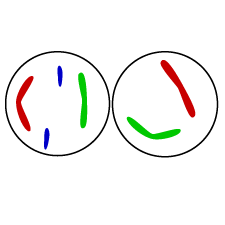 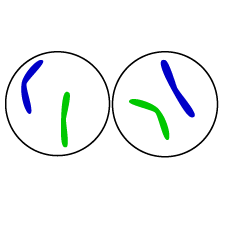 The cell divides. Each daughter cell thus has a copy of the primary genome and one strand of the secondary genome. In an egg, the auxiliary strands are not systematically pulled to either end of the cell and thus each end up in either of the daughter cells at random, independently of each other.