The Cave of Dragonflies Zodiac

What it is is basically a Pokémon calendar, assigning each day of the year a unique Pokémon such that the one for your birthday is your "Zodiac Pokémon". Basic probability dictates that yours probably isn't your favorite, but hey - it's still fun, right? And because mythology is also fun, the Zodiac has a little 'in-universe' backstory.

Long ago, when the world was young, only the legendary Pokémon existed. Mew had been given the power of Life, and began to make from itself the lower Pokémon, but Mew worried that the Pokémon would have difficulties surviving on the young planet, and therefore asked that for every Pokémon that it created, one of the legendary Pokémon named itself as its Guardian and would watch over the species for ever and ever.

The legendary Pokémon had previously divided the year between themselves such that each ruled over one week in one of the four seasons of Water, Earth, Fire and Air. Mew, however, asked that they dedicate the individual days of their reigns to the mortal Pokémon. The legendary Pokémon agreed to it, and when Mew created a family of Pokémon, one of the legendaries would name itself as the Guardian of that family and dedicate to it one of its days.

But though all agreed to this system, the legendary Pokémon still had conflicts of their own. In particular, when a mysterious Pokémon calling itself Deoxys had arrived from outer space and demanded a place among the legendaries, some opposition had remained despite the vote coming down in its favor.

One day, on the Day of Magikarp, the legendary Pokémon arranged a great gathering to discuss the state of the world, but many did not want Deoxys to attend, still suspicious of his motivations for immigrating to this foreign planet. As the Day of Magikarp was in the Reign of Lugia, Lugia had the final word, and being one of those opposed to Deoxys' inclusion as a legendary, Lugia refused to invite him. This angered Deoxys, and to take his revenge on Lugia and the legendaries, he decided to cripple the Pokémon of the day. Back then, Magikarp were strong Pokémon drawn to anger and hatred, but Deoxys, using his power over genes to alter their nature, made them weak and quelled their fighting spirits, in the hope that they would be driven to extinction and Lugia would be blamed for letting them perish.

But the Magikarp were more resilient than Deoxys had anticipated, and upon evolution into Gyarados their power returned redoubled. They survived Deoxys' plan, and though Lugia could not restore their former power, he sealed it so that they could not be weakened again. Livid at his failure, Deoxys retreated into himself and planned revenge against the legendaries, Lugia, and now also against the Magikarp that he had failed to wipe out.

Though he could not create new life on his own, he plotted to inspire humans to create a new legendary Pokémon. He tried his hand at first with the virtual Pokémon Porygon, which he innocently offered to Guard after the legendaries heard of it; then, confident in his skills, he planted the idea of the creation of Mewtwo in the minds of the humans.

At first, the newly-created Mewtwo did just as Deoxys had hoped, causing chaos among the legendaries and attempting to kill Mew and take his place. However, Mew met with Mewtwo and turned him over to the legendary Pokémon's side, and Mew had immediate suspicions about who was behind it. He went to Deoxys and told him: "You misguided fool; inspiring the creation of a new legendary Pokémon could have been the undoing of us all. If you swear that you will never do such a thing again, you may continue to inspire the humans to create lower Pokémon; but if you refuse, Mewtwo will become Guardian to the Pokémon that you have protected instead and you will be expelled from the ranks of the legendary Pokémon."

Deoxys grudgingly swore never to inspire the humans for the creation of a legendary Pokémon again, though he was permitted to inspire the creation of two new members of the Porygon family. Meanwhile, thanks to Mewtwo's newfound humility he found acceptance among the legendaries, reigning over a new Season of the Mind created in his honour.

From this day on the legendary Pokémon lived in peace and prosperity, but Deoxys still burned with jealousy and a deep-set grudge against the legendaries who had wronged him - and in secret, he was still planning his ultimate revenge.

(The quirky treasure-hunt-slash-text-adventure game Magikarp: The Gathering picks up where the Deoxys aspect of this story left off, if you're interested.)

Where Did It Come From?

The Zodiac was originally created for the third generation of Pokémon after I had noticed that there were exactly 365 non-legendary Pokémon. Somebody just had to make use of this magic number to do something like this, and because to my knowledge nobody else had, I did it myself. The year was split into five 'Seasons', each of which was split into four 'Reigns' (dominated by one legendary each) and one extra day that fell into the 'Reign of Mewtwo'. Each of the ordinary reigns had 18 days, each assigned to one species of non-legendary Pokémon that I had manually placed to fit at least somewhat with the legendary Pokémon of the reign. This way, every single existing Pokémon had either a day or a reign to itself, and people could look up their birthdays to see if they got a Pokémon they liked.

Later generations, of course, added more Pokémon, and while I could have simply kept the Zodiac as a relic of the third generation, I set out to update it when the fourth generation came along. Since then, I've come up with a new Zodiac for every generation released, figuring out some way to set up a reasonably logical system where every Pokémon has a place in the Zodiac and no arbitrary distinctions are made (that is, if two Pokémon are not treated analogously, it must be because of some logical difference between them, not simply my personal whims).

In the current Zodiac - the seventh-generation one - there is one day for each non-legendary final evolution, except that the Ultra Beasts, being non-unique and thus non-legendary but not from this world, are clustered together on Leap Year Day. Each legendary reign is six days long, with legendary families - Phione and Manaphy and the Cosmog family - sharing a reign.

So What's My Zodiac Pokémon?

If you want to look up a particular date (such as your birthday) in the seventh-generation Zodiac, you can do so using the form below. This will show both a text string with the Pokémon of the day, similar to that displayed on the pages of this site, and a selection of images representing that date that you can use however you like (you will have multiple choices if the day's designated Pokémon has multiple forms). If you have Javascript enabled, click on an image to have the HTML and BBCode for displaying that image shown below the images.

Dec 01: The Day of Electivire in the Reign of Thundurus, Season of the Air 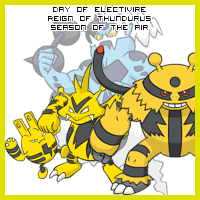